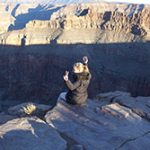 This week we talked about our Las Vegas travels.  We stayed at the New York, New York hotel and casino and I highly recommend staying there.

Unfortunately Mark got the flu and ended up being sick for three weeks.  We think this was from someone traveling on the same plane that we were, since we both got sick, but he really just recently recovered and I only had a slight fever for a couple of days.  Neither of us had a flu shot.  He could have gone to a clinic or the emergency room, but didn’t want to and our normal doctor refused to give him medicine over the phone.  We ended up having to cut short our vacation by two days.

The first couple of days before he got sick were very nice.  The temperature, although cold, was in the low fifties and sunny.  We went to the Grand Canyon, 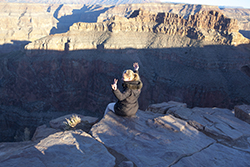 Hoover Dam and the Red Rock Mountains.  I got a lot of very nice pictures.  Grand Canyon was on Indian territory and was very cold when we went there.  We were very surprised that there were no fences and anyone could have easily fallen off of the edge.  The picture here is of a girl seated right on the edge of the canyon.

We went to the NMX conference for podcasters and bloggers.  We had a good time and met Leo Laporte who does the TWIT podcasts for tech people.  I was able to meet him and talk to him for a little while; he is very nice.  If you like any kind of tech news or talk about gadgets, Windows or Iphones then you would enjoy listening to Leo’s many podcasts.

The next conference was the CES, Consumer Electronic Show, which I have wanted to go to for years.  Unfortunately Mark was too sick to go and I had to go by myself.  It was extremely crowded (read my post on CES) and hard to view any of the new tech products coming up for the new year.  I did get to see many televisions, which were everywhere.

We were able to go to a few shows, but Penn and Teller’s show was by far the best.  It is somewhat of a magic show that is funny, on many of the tricks they show you how they are doing them.

Maybe next time we will be able to have a longer and more enjoyable time.