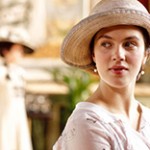 Back for our second episode, Mark and I are continuing our take on Downton Abbey.  Sybil is the main constant throughout.  Her funeral is 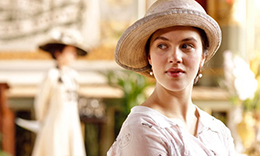 just touched on as you see their cars traveling from the burial and mostly everyone wearing sad faces.  Black is worn by all, until right at the end when we see Robert Crawley in a blue suit.  Cora Crawley can’t seem to forgive him for Sybil’s death.  He did make an ass of himself during her lengthy passing.  Even if he did choose the wrong doctor, he wasn’t much of a help or very compassionate.  Too stoic for my taste.  But his mom came to the rescue and got the marriage back on track when she asked the good doctor for some help. He explained to them that Sybil probably would have died no matter what.  The couple is then shown hugging.

Egads – no makeup!  I’m sorry, but this is one of the biggest things that struck me in this week’s past episode (Feb. 2, 2013 here in the US).  Ivy is yelled at by Mrs. Patmore in this episode for wearing a little blush (not that she really needs it).  It is hard to fathom coming from our day and age, at least in my circumstances, that this young girl wouldn’t either leave her job or just continue to wear it.  But if you need a job and feel like you wouldn’t be able to get a comparable one, then you might just have to suck it up.  Sometimes you just feel like smacking these characters.  It doesn’t really look like the rich folk wear makeup either.  Of course, they are in England.  This is part of a general theme of showing how women were viewed at that time.  Lady Edith is asked if she would like to write a column for a newspaper.  But is it her good writing or is it because of who she is?  Why should she have a job, it isn’t her place to do this.  Daisy is now offered an inheritance and a future doing something she loves, but should she really stay “in service” instead?  Women don’t own businesses, unless sometimes they are widows, as we are told her father-in-law.

Dan Stevens, who plays Matthew Crawley, is just finishing up in a play on Broadway.  You can see some scenes and get more information here.  He stars in it with Jessica Chastain from Zero Dark Thirty, and who’s been nominated for an Oscar.  The play is called The Heiress and is based on a Henry James novel called Washington Square.

You can see Mrs. Hughes and Mr. Bates in a short interview here along with several other clips.  It is amazing to see how great these people look in real life and yes, with some makeup on.